The hail was a surprise after so many weeks of sunshine. It clattered off sprung metal and peppered the ground, raising welts in the clayey topsoil. A walk at lunch along the track beneath the pylons. These are working woods and where the logging path leads to a substation, the ground is churned and carved by wheels. Muddy pools gather where for weeks there has been brute tidal sculptures of sand and clay. Here and there the standing water has a meniscus of oil and sun-caught light. The nightingales have arrived, perhaps a week earlier than usual. It’s nice to think they were tempted into coming early by a warm tunnel of wind above their west African coastal forests, a tunnel stretching northwards, northwards; but who knows what abstruse commands they obey? I’ve heard a couple, but it may just be one bird. It scrabbles in the brambles and gorse, frantic and garrulous, like a touretter let loose with a ray gun.

Deeper into the woods, away from the crackle and fizz of the pylons, the path sweats and seethes; the river, which has gasped in its steep-sided canyon these last six weeks, is tumbling with purpose. Dock fronds fill the ridings alongside reefs of soft rush. The first umbellifers unwind. Somehow, maybe it’s a trick of the light, the rain has generated a new cholorphyllic intensity, as if the very fabric of things has thickened. You pinch parcels of air between thumb and forefinger, invisible information riding the whorls and ridges.

Later. A bench. The wind has dropped and the sky is a violence of blue. I think of other wide skies and what you might be dreaming about. I lie back and fall softly into the shadow place and as I softly fall the skies merge and there you are, closer now, faces upturned, blinking into the same curtain of light.

Each year the emptying of winter seems to reach an unbearable pitch, only to broken by the return of birdsong. 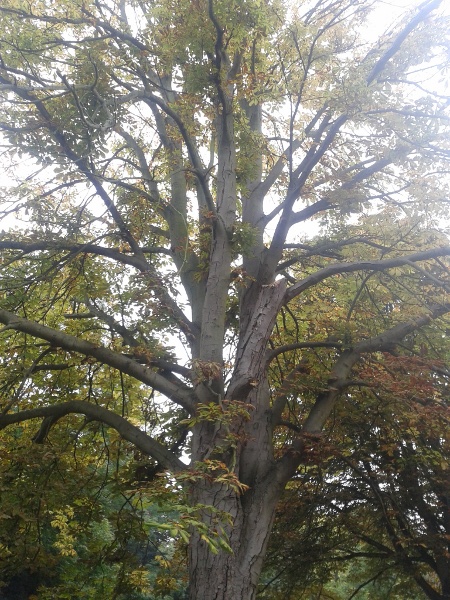 September had been another wet month, the return of the damp dark days of summer. Saturday had been warm, though – like a hole in the sky, a glimpse of what summer might have been. We sat on benches and let the sun heat the bones in our faces. Then: Sunday. It was as if autumn had dropped in over night: mist and cold air, the kind of cold air that nags at your collar gaps and sleeve holes. In the park a robin sang in a scrub of roadside maples, its song bright and silvery in the thin air. In the gaps between the oaks, a stand of dandelions, probably the last of the year – the flower heads remained clutched and uncertain, curled in on themselves. Every surface was slick and shiny, the ivy leaves sheened with a layer of cold steel, the chipped metal bins beaded with drops of moisture. There’s that odd paradoxical thing with mist in that it foreshortens distance and expands it all at once – R barrelled on ahead on a scooter and quickly seemed far away, but her shrieks, high and wild, quickly came back to us, resonating off invisible walls. The Ash held its usual stillness, in places impenetrable like black stone; but in the shallows it rolled along, water from the moors rushing to the Thames. At the Pooh-sticks bridge we found discarded rotten conkers, and made a broad fan from fallen leaves: pin oak, scarlet oak, horse chestnut. The day turned slowly, slowly turning; we left the park to its hanging silence and faded home like spent ghosts. 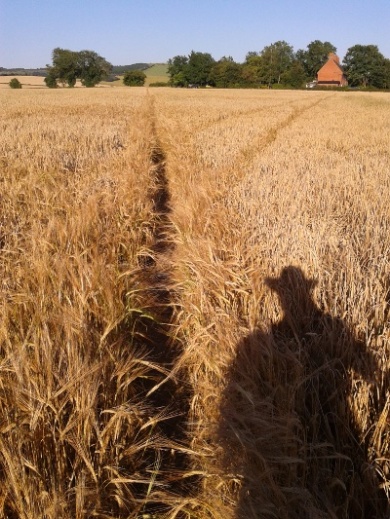 July evening, the first good weather since March. March. For 3 months we huddled under grey skies in front of glaring screens, staring bemused at long range forecasts. When the weather came it was like a spell – that strange figure of speech ‘a spell of good weather’ suddenly making sense. Even then the world seemed oddly deserted, as if people didn’t trust what they were seeing.

Winchester Hill was ablaze – the low lying barley fields almost painful on the eyes. As I climbed, the ground released trapped heat; it pooled around my feet which burned in a state of surprise. 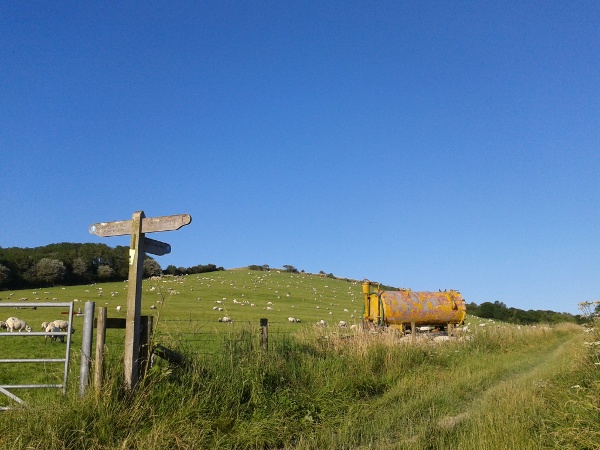 July, the last of the bird song. Skylarks, the strange whirr of the yellowhammer, the chuck of blackbirds. Over everything the calls of the lambs and the dry answering barks of the ewes; and behind this, the evaporating roar of planes, so high in the blue as to look like bone shards. Goldfinches peep and tinkle, dashing between low stands of wind-beaten hawthorns. No people. No people.

I enter a chase of yews, the light colder out of the sun. Ivy-clad trunks, lichen-clad. The sheep are incessant. To the right, a meadow, knee deep in sorrel and grass over which hover ragged globes of midges. To the left a fallow field smoulders; a few lone poppies totter in the light breeze. The field edges are a tangle of brambles and bindweed; boulders of chalk the size of fists, the size of giants feet, line the path margins. A spooked pigeon rises, angling into the sun.

A gravel riverpath at the foot of the hill. I have been here in winter when it is often impassable; now in this wettest of summers it rushes and chatters across the stones, inviting hot feet. I splash for a time then climb the steepening sides into a field of crops. Last of the sun: light slants across the plant heads, illuminated strands of webs like fine hammock strings between the individual stands of wheat – out of the sun they become invisible, in its glare they are like retreating filaments of bowed crystal. The water is just in earshot, a comforting babble. A green woodpecker yaps, sheep call across the pasture. Jackdaws call, abed in a stand of oaks, their cries like answering chimes, answering in a higher register.

Back into the hollow way of the riverpath, the sun dips behind Beacon Hill. Heat-trapped smells rise in the cooling air. Months of rain have saturated the ground so even in this landscape of drained chalk there is the smell of damp, of rot, of contained water. In the crook of a massive three-trunked ash I pause and listen to the onrushing stream.

Nearing the end, I realise my boots are like autumn boots, winter boots – mud-clagged and heavy. A new moon through the crown of a thinning ash. A buzzard cries. The swollen river flows faster than I can walk.