It’s February. It’s still raining. For most of November and early December we sat under a grey ceiling of high pressure and the skies stayed sane – little rain fell; there was hardly any wind. It meant for a beautiful, extended autumn, the trees holding onto their sprays of fire for what seemed like weeks on end. We watched the slow blaze of the limes and silver birches, the bright gold of field maples and aspens; as late as the 10th December, we stood beneath  a mesh of hazel poles, still in leaf, and inhaled the late copper flush in the oak woods. Then came several days of storms, storms which ripped the remaining leaves from the trees, dashing them against the windows, piling them in ragged roadside barriers. It was the start of things.

Since then, we’ve been deluged – there’s no other word for it. Depression after depression has swirled in from the Atlantic, bringing lowering, cinerous skies, gravid with water. Out in the world you can feel the weight of all that has fallen – it pulls at the horizon: garden grass sucks at feet, water brimming around the soles of shoes, as if depressing a sponge; field margins tip roadwards or disappear altogether; woodlands hover and double – ankle deep in gathered rainwater they reflect themselves, the eye deceived by the thresh of new limbs; tracks and roads seem in a constant state of movement with new streams and waterways coursing in pulsing v-shapes; answering the pull of gravity these ephemeral brooks seek out natural dells and declivities, forming murky pools.

All this has meant a new kind of water-awareness, a water-consciousness, flickering in the periphery like light glare off a standing shoal. The river that wends through the woods, generally unnoticed,  has a sudden new voice; from the watershed – up on the chalk and clayland heights – it brings a new secret cargo – a cargo of storm damage on gritty, scented water: twig-meal, fern outriders, unexploded plastic. On concurrent nights after a walk along the groaning banks of the lower reaches, the boy and I dreamed of charting the river’s course, seeking out the occulted mainspring and following it underground into the chalk chambers of its origins. We await a clear day…

Whiteley Pastures, a Wednesday, mid-afternoon in May. Another week of closed-in skies and chilly easterly winds, like a breath-remnant of what gripped us in March. The woodland rides are slow in their coming-to-life. Sprigs of as yet unopened cow parsley sway above the last of the celandines and anemones; beneath these rises a tentative new carpet of dog violets, herb robert and the emerging purple fingers of bugle. Most of the trees are now in leaf, but it’s still possible to come across near-naked oaks and sweet chestnuts. We have nothing to gauge the lateness, no almanacs to refer to, but there is talk – things feel late, in abeyance. Alongside the long straight logging path there are deep runnels; these have been full with rust-coloured water for over a year since the coming of the rains last spring. They are starting to empty and reveal their depths. The earth beneath is stained, heavy like wine-dark clay.

I stop for a time at a thigh-high pile of birch logs, left over from last year’s felling. The bark is stripped in places, the wood soft and stained; the rest is thinly silver, pocked with black eyelets or furry with lichen. The logs are damp to the touch, but as a whole they form a kind of welcoming rough tabletop. I edge backwards onto it and lie down, listening to the echoing madman-in-his-cell call of a song thrush. I drift off.

I wake befuddled and slowly raise up, noticing a dark smudge out of the corner of my left eye. In one of those odd moments when a second becomes something architectural and we’re able to roam about inside it, leisurely gathering sense impressions, I marshal enough data to realise it’s a snake, a black snake at that, coiled in on itself, its head resting on a the thickest part of its trunk. At the walled end of that second I guess that it must be a grass snake, recently out of hibernation, bloodwarming in what passes as the final days of spring. I notice the lack of neck collar and the near-absence of the repeating diamond scales. Melanistic. It’s a melanistic grass snake. Around this welter of observance is a chamber of something else, something from further back in my brain, something shrieking ‘snake!’ I jerk my leg away, and the snake, reacting to my lumbering frame, hisses (or do I imagine a hiss?) and is gone, gone into the depths of the woodpile.

Needless to say, I’ve been back several times for another sighting. The log pile is crowded in now, beset on all sides by encroaching brambles and sedge grass. It looks oddly dwarfed. If the snake is there, it’s keeping quiet, and I daren’t lay down again. Just in case. 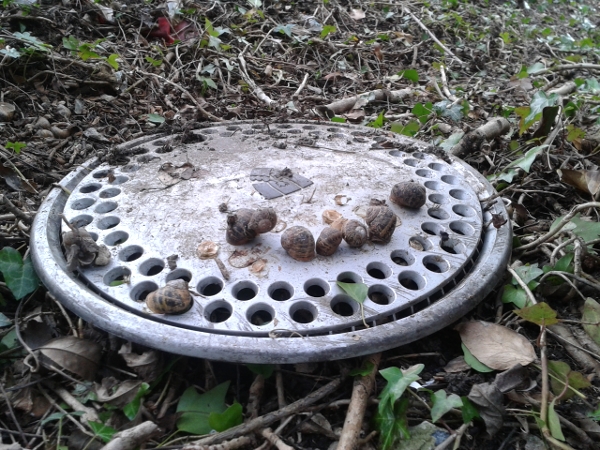 I’ve not known a March like this one past, cruel and bitter under a pall of grey skies. The month started with a promise of spring. We walked in slanting sunlight across the top of Hockley viaduct, hooting, miming trains. Beneath the arching brickwork the Itchen had burst its banks. The water meadows, green and sharp, brimmed with pools of sunbright water. We parted for shrieking cyclists and R tumbled with flat hands on the cold concrete. On an old siding, under a stand of fruiting hazels busy with flitting goldcrests, we saw a discarded hub cap, home to a colony of snails. There came two days of bright sun, the air bearing the first slight signs of the spring thickening – birdsong, pollen song. We waited. Then came the whispers of returning winter. Cold air from the east, bearing snow and arctic temperatures.

The cold came in overnight, a giant storm from the north east swirling across northern Europe and up across the channel islands. The air was raw and metallic, dawnlight bringing with it a purple glow that fanned out across the underside of the roof of clouds – a roof that was to stay with us for pretty much the rest of the month, yielding little, if any, rain. That day it snowed for a good 3 or 4 hours, the air thick with it. Sheltering under a canopy of arching oaks, I could almost feel the ground contracting, the newgrowth shrinking back into itself. The birds had fallen silent.

That night the storm roared around the house. I came up from sleep, dimly aware of a muffled banging. I mentally travelled the hanging air from corner to corner of the house, but couldn’t make sense of where it was coming from. I came down the stairs feeling unmoored. It was as if the interior air itself were disturbed, displaced by the ferocity outside. I opened the back door and I felt the house gather itself around me as the night, blackly malevolent, seemed to force its way in. I waded out into the liquid dark and secured the door with a bag of cement dust that, disturbed by the whipping wind, puffed motes into the air that were sucked away into the darkness.

This air from the east stayed for the rest of the month and on into April. It brought with it ghostly remnants of its provenance, a taiga-born density of cold, a breath of ice. The brute cold settled into the heart of things; objects carried a new kind of weight, as if they’d been penetrated to a molecular level. As such, the usual spring signifiers remained resolutely enfolded, the hedges and banks dull of colour, the woods silent, arenas of felt absence. Everything felt held in abeyance, waiting, waiting. In the middle of the month, I was in the Cotswolds and the weather broke for a single day. It was as if the earth threw off a layer. Huge flocks of fieldfares and redwings broke cover, driven by a frantic impulse to begin their homeward journeys; the sky was a holding-pattern of hungry red kites, all monitoring their territories for carrion; usually elusive jays dropped from the bare oaks and pecked at the raw ground. The following morning it snowed again, and the earth re-enfolded itself.

At the beginning of April, finally there came a day warm enough to stand still. I headed into the woods with the boy on his scooter. We were looking for the bluebells, usually ‘up’ by now, washing the beechwood floor with their smudges of purple. The air had lost some of its edges, and a thick greyish haze hung over the fields and distant stands of trees. We wondered together if it was pollen, or if the heat had stirred up clouds of sleeping insects? As if in answer, we saw a solitary housemartin, the first of spring. The beechwood was cool and clear, and free of the nodding bluebells. The floor, though, was carpeted with the glossy green leaves. The bluebells would come, but like everything else held in the cold paralysis, they would come late. No matter. A ragged silver-birch, multi-trunked and choked with ivy, showed signs of fresh excavations in its hollowed out base. We sat and ate jaffa cakes idly wondering if the culprit might show itself. The sky purpled above us. It quickly became grippingly cold. We headed home across a bone-hard field, out, out of the mineral wind.